The capital of Nepal, Kathmandu, is a labyrinth of indistinct tall rundown buildings woven together by a network of dark alleys. If I really searched I could see patches of the sky but I was too occupied with avoiding traffic and potholes. There’s anti-conversion laws that are trying to suppress the gospel so things are a bit different. Nepal is 90% orthodox Hindu so it’s similar to India in that way.

In the city, we went to a couple churches with pastor Mark Spitsbergen and watched him preach and pray for people. We had started this trip with Mark because he invited Overland Missions to come, and thus the three of us were sent to see what it’d be like to send missionaries there. None of us had worked with Mark before and didn’t know him well and weren’t sure what to expect. 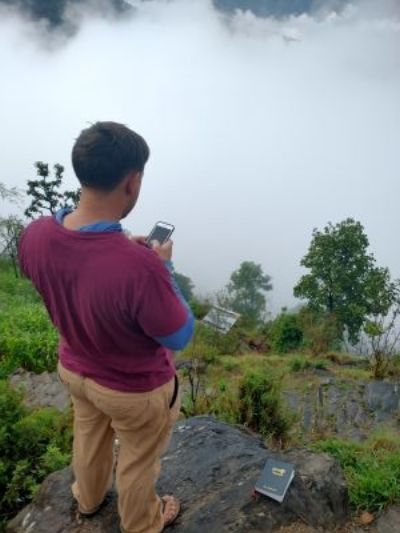 Mark is passionate and visionary, he’s a revivalist on fire ready to stir things up, but he can be very gentle and pastoral as well. His wife traveled with him and was a delight. As Mark ministered, we helped him in whatever way was needed whether that was catching bodies as they hit the floor, sharing the word, or praying for people.

We loved working with the Nepali people and built some great friendships with them and we will go back there later this year.

After 9 days in Nepal, we went with Mark to Kashmir which is in northern India. Mark has a missionary family there and we stayed with them. They were very hospitable, friendly, and awesome. Marlin and I had a blast entertaining their 4 young children who haven’t seen anyone from America in 5 months. The oldest daughter who’s 8 insists that we return sometime before her 20th birthday, but as much as we want to, we can’t make any promises.

During our 4 days in Kashmir we accompanied them as they scouted out dwellings for future missionaries coming in as well as land and venues for events and revival meetings. One day we went with one of their elderly Kashmiri friends on his boat to visit the islands on the lake. He was a former political figure and was now in his mid-80s and had plenty of stories to tell and pictures to show.

Dal lake is home to 80,000 people with various houseboats and islands packed in there. Tourists (of which most are Hindus from India) love to spend the night on the houseboats and visit the mughal gardens and various Hindu shrines in Kashmir (the valley of the gods). The territory is predominately Suffi Muslim though and they speak Urdu which although similar to Hindi is the language of its neighbor Pakistan. The people there are tolerant and aware of other religions due to said tourism, but they have yet to be transformed by the love and power of Jesus Christ.

We met with some of the leaders there and visited their villages as Mark and his team started building relationships which is the important first step. Thus there were no revival meetings going on yet, but we got to witness all the planning and scouting that goes into that.

I was amazed to find that Kashmir had all the same wild plants from back home in Iowa: dandelions, burning nettles, burdock, mulberries, pineapple weed, lamb’s quarters, spearmint, raspberries, blackberries, etc. The weather was cool and comfortable compared to humid hot Cambodia. Kashmir has endless apple orchards and saffron fields and cottonwood forests (which I assume they use for making cricket bats).

I did get a stomach ache which lasted a couple days but I don’t think it was from unsafe food so much as it was from eating too much meat and not chewing it fully.

It’ll be exciting to see what God does in Kashmir and Nepal going forward as more and more missionaries arrive.

I let Marlin and [redacted] book our flights to and from Cambodia and trusted their judgement, I don’t worry. However, coming back from Kashmir our flight was delayed (probably because [redacted] left a battery in his checked bag and when asked about it insisted it was in his carry-on which was on top of the checked bag when it went through the scanner. So our flight being delayed, leaving us with only an hour layover instead of the 2 hour layover planned. We landed in Delhi India and quickly took a taxi to the international terminals.

At first the taxi drivers messed around and chatted with some friends and asked us if we needed to stop for smokes or anything while they stopped quick to get some things. I was chatting with Marlin in Khmer about how slow the taxi was when suddenly the music started blaring and the taxi accelerated to a dangerous speed and darted through traffic like a getaway car.

The taxi driver tried to scam us into paying $50 in Indian rupees but when asked what that was in USD he said $100, so Marlin and I decided we most definitely were not paying either of those prices and instead gave them $30 and walked away.

We missed the checkin time for our flight, so Marlin scrambled to see how we could get a new flight. I insisted he get a partial refund or a new flight issued by the airline or the booking site, but of course that didn’t work. It was midnight, we were all really tired and stressed and wondering what flights we could book to get back to Cambodia where we wouldn’t need a visa to transit through.

Marlin and [redacted] booked a flight through Singapore whereas I, since I had no checked bags, figured I could just go through Thailand easily. So I slept for a few hours on the airport floor with Marlin and [redacted] and waited for check-in to my flight. At 5:30am (3 hours before my flight) I went to check-in and showed them my covid vaccine card, my travel insurance, and everything they asked for. But they insisted that I had to have a Thailand visa because my flights had different booking numbers.

So I went back to Marlin and [redacted] and quickly applied for a visa to Thailand. I prayed a bit for a miracle but didn’t put much stock in it and tried to see if I could get a refund on my flight that I could not take. I was feeling frustrated which is rare for me and I was about to just extend my stay in India indefinitely when I received the Thai visa in my email. That was nothing short of a miracle.

I went back to check in and a different lady called me over to her desk and I showed her all the documents. Upon showing her the visa, the lady who had turned me away an hour ago ran over in disbelief and asked “where did you get that?” I explained that after she denied me earlier I applied for a visa and received it promptly.

I now had two hours before my flight and so I went through security and waited at the gate. The airline staff called me and only me over to check my documents again. They were obviously suspicious and were doing their best to find a reason to deny me the flight but my documentation and papers were flawless. If God is for me, who can be against me?

Coming back I realized how friendly Cambodians are. I ordered a couple fruit coconut shaved ice treats for 10,000 riels and the elderly lady making my order told me that there was a promotion where I’d get 3000 riels back if I told the cashier of the food court about it. I didn’t particularly care, but this lady was adamant and so she went over to the cashier herself. After a few minutes she came back and gave me the money left on my food court card plus the 3000 from the promotion. 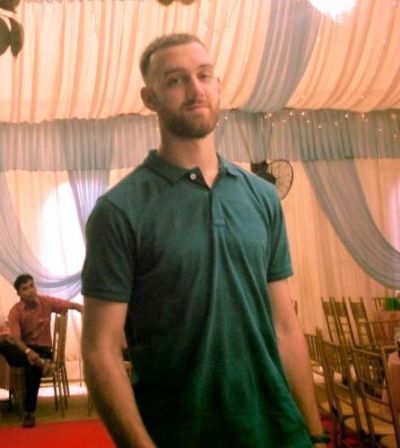 Foreigners always talk about being cheated by sellers, but more often than not I find that they give me the same price as natives and I get good deals without haggling.

I think maybe people treat me differently because I happen to match the ideal Cambodian beauty standards which is white skin, big nose, and a tall athletic build. My rotten teeth, baggy clothes, farmer’s tan, and rough beard don’t seem to do enough to detract from that unfortunately. But I’ve gotten used to every stranger I meet (mostly men) asking me if I want a Khmer wife. Maybe there’s something about my demeanor or my conversation that triggers that specific question that I need to change in order to not come off that way. Micah says it never happens to him.

Sure I’d like to get married and have kids someday, but pursuing that would be nothing but trouble in these current circumstances.

Well, I know enough of the language to share the gospel with my rickshaw taxi drivers now. Like clockwork, every stranger I meet express their shock that I know the language so clearly after only 8 months in the country. (really I’m not particularly proficient, but Cambodians are quick to flatter).

Micah asked me if I would be upset if I had to leave Cambodia and move to Nepal after learning the Khmer language for 8 months and I said no. Obviously I’m not leaving because I’ve made a commitment to my team here, though I’m happy wherever I am. Do I prefer Cambodia to Nepal and India? Yes I do.

Well, that marriage between Micah and Tori did not go through. I’m partly to blame for the broken hearts involved in that (though no one blames me); Pray for unity in our team going forward and that I grow in my discernment.

I got to meet Tori’s mom, she was sweet and assured me not to worry about her and Tori and that they had recovered from the sudden breakup and cancelled wedding.

Please pray for Tori as she moves into new responsibilities and positions within our team. Also pray for Micah as he also transitions into expeditions. He’s leaving Cambodia, but I know he’ll thrive in his new role which is more in line with his strengths, and I will miss him dearly.

I got to stay with Micah and his family when they visited, they are fun. We went shopping, I helped them get Covid tests, and we went out to eat a lot. 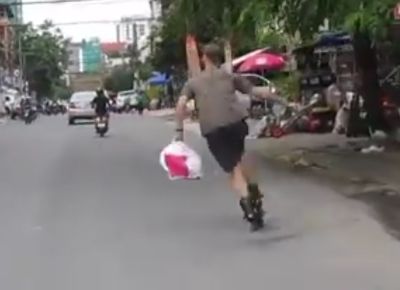 I bought a pair of rollerblades and have been skating through Phnom Penh and the roads near my village. I had no idea that skating would be such an effective and quick way to get around town. The people are so bewildered and amused and excited by it.