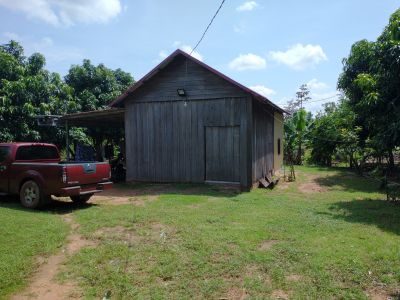 I couldn’t be more at home. I live with Amy and Thanak and Samuel in a tropical farmhouse: the land grows bananas, papayas, jackfruits, mangoes, cashews, and jujube fruits. There’s a dog for security, 3 cats for pest control, 4 turkeys, 4 or so chickens, and an artificial catfish pond. We actually have electricity, running water, a mobile internet signal booster, a refrigerator, a toilet, and a washing machine.

So life is pretty comfortable here, we sleep under mosquito nets and sweep up the bugs and chameleon poop that accumulates on our tile floors. The sounds at night are pleasant: rain on the metal roof, chameleons mating in the rafters, roosters crowing, dogs barking, bugs chirping, and the distant gentle bass notes of our neighbor’s party music, and when those things are all silent sometimes you can hear the drone of the monks’ amplified chants. Do not imagine for a second that I’m complaining, I find it all rather serene.

It rains at least once a day and we enjoy riding our motorcycles through mud paths to get to people. The food is flavorful, the best I’ve ever had.

I live in Poomtamageit; it’s good to know the name, because all the roads look the same and there’s no street signs.

Working in the villages 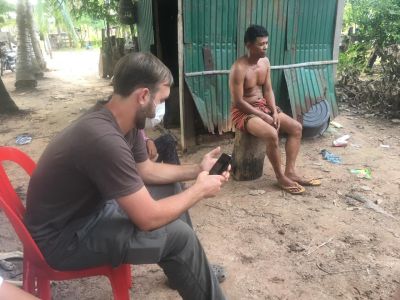 Since I’ve gotten here, I’ve been tagging along with Amy and Thanak to do whatever they’re doing. (They insist that I don’t have to, but they like having me around, and I can’t speak Khmer yet anyway.) Our options are a little limited during covid restrictions, but we’ve been able to still meet with people in small groups.

In the neighboring village of Kunthuit there’s about 4 believers, we meet with them a few times a week in the mornings and teach and encourage. They’re persecuted for following Jesus and harassed for not sacrificing to the ancestors and not going to worship at the pagodas (places where monks live). They’re fun people who are passionate about Jesus.

There’s an old woman who is chained up because she used to be crazy before she met Jesus. She told her son Sopiep about Christ, and now he’s devouring scripture. He’s read the new testament and has started on the old. He went with us ministering house to house in another village and now he wants to learn English so he can translate for expeditions.

Sreytoot is learning how to honor her mother the witchdoctor without participating in witchcraft or sacrificing to spirits; and her mother understands. Ming I-ep is trying to restore the familial relationships she lost when she wrongfully went to prison.

We went to the village of Nekkru Lun and Lokkru, who are the pastors of a church there. We went house to house with them talking to people. They’re all military families in that village, and a lot of them are Christians, but they don’t go to church anymore because the previous pastor was abusing funds. 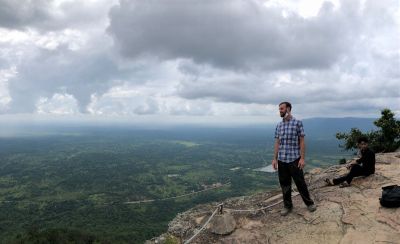 I don’t understand what people are saying most of the time yet, but if I hear my name in the proximity of laughter, I can be pretty sure they’re talking about:

Language school is fun, it’s online in the afternoons, so I have time to go to Bible studies in the villages. Our class is just me, Micah, Tori, and 2 older missionaries. There’s quite a few new sounds and they say Khmer has the largest alphabet (technically it’s an abugida which means it’s syllable based) of any language with 33 consonants and 48 vowels.

I’m excited to be able to communicate with people and get in on some of the jokes they’re always making. 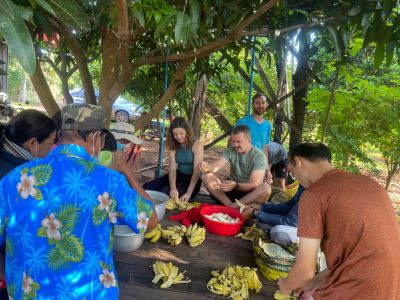 The team (Amy, Thanak, me, Charles, Micah, Tori, and Chai) got together with some local Christians and we all made Noam Onsam together as is traditionally done on this holiday week. Except we make these sticky rice desserts for friends and family instead of sacrificing them to our ancestors. It takes all day and all night to make them. 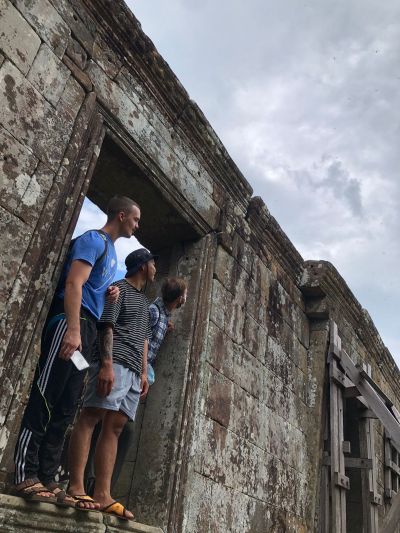 Managed to travel with the Cambodia team to see the ancient Preah Vihear temple on the mountain. The stairs were closed due to a broken ladder, but we rode a truck up to the top. Nekkru Lun’s little granddaughter Hannah kept running ahead, so we played together a lot because no one else who wanted to run.

There’s a façade of happiness across Cambodia, but the people are oppressed by demons who visit them in nightmares as their deceased family members and threaten them and demand offerings. They’re caught up in drugs and alcohol and in fear of covid and in fear of the social and legal consequences of not adhering to the covid guidelines.

Pray that Cambodia would turn away from evil spirits and find abundant life in Jesus Christ.