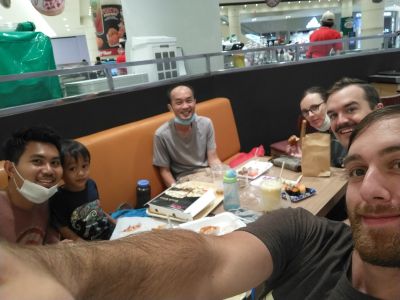 It’s finally over. Met up with fellow missionaries Micah and Charles and Amy and Thanak and little Samuel. Thanak and Amy gave us a ride in their new truck out of the fancy hotel to a much more economical hotel. This one was only $5.48 a night per person and included free breakfast made to order.

We took a walk to the Aeon Mall, it wasn’t far, and the whole time I was hit with the realization that I’m in Cambodia with my friends and that it’s not even strange. At the entrance to every store in the capital of Cambodia is a temperature scanner to make sure that we don’t have a fever, and masks are required everywhere we go. 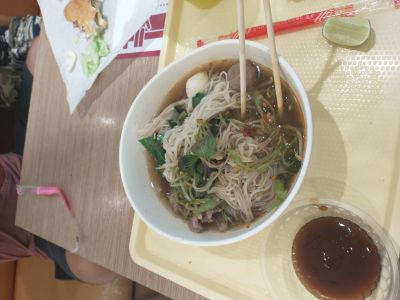 The food there was really cheap and there was lots of wonderful options: Japanese food, Chinese food, Khmer food, American food, French food; it was quite the sight. I had not eaten much food in my 2 weeks of quarantine since I wasn’t really hungry and the food was expensive, but that day I ate a lot. Counting mall food and street food I spent $10 worth which was enough to feed 3 people.

The mall was the nicest mall I had ever been in, and the largest too. I got a sim card for my phone and Thanak showed me that I can get 131gb of data for $8 a month.

We all went to Thanak’s family’s house and they fed us fried bananas which tasted like little sausages. It turns out, like most people in Cambodia, they don’t speak English, so Amy and Thanak would translate when they thought it was needed. Even the Cambodians that speak English I usually don’t understand, but Thanak is always there to help me.

Thanak’s mom persuaded Micah to get “coined” which is the application of minty balm followed by scraping of the skin with a metal lid. It’s like the evil cousin of the back massage. To everyone’s surprise, Charles accepted the offer (albeit hesitantly) and we all had a laugh watching him endure the “torture”.

I had decided that I wouldn’t partake, but after some nudging I figured that I might as well; provided Thanak’s grandma administered it. No one lets the grandma do it because she is exceedingly rough. In order for it to be a proper contest though, the mom insisted on doing half. It hurt like nothing I’ve ever experienced. The scraping burned my back like I was being dragged across rough concrete. Then I insisted it was the grandma’s turn. Although she used a lot more pressure and took longer strokes, she did less of them so at least to me it felt less painful. And five days later I still bear the marks on my back.

The next day I decided (with no coercion or outside forces) to go to the dentist and get some work done. They x-rayed my teeth and walked me through the problems with each and every one of them. A few in particular the dentist said were hopeless, so he pulled one of them. Cost me only $36 which is insanely cheap for how professional the work was. Thanak decided he’d quick get his teeth cleaned while I had my “big work” done, but mine took only 40 minutes. I waited an additional 2 hours for him to finish getting his teeth cleaned, not that I had anywhere to be.

I scheduled to have some more teeth pulled the next day. What is happening to me? I’m actually getting dental work done and excited to do it even though my teeth give me no shame nor pain?

The next day Thanak led us in worship in our hotel room and I felt glad to be doing corporate worship (worshipping together, not worshipping corporations) again. We paid for the first level in the language school, went shopping, and then we ate at the food court.

Charles, Micah, and Tori took a bus to their province of Oddar Meanchey. I was now alone with Amy and Thanak and little Samuel.

So the next morning we checked out of our hotel and Thanak took me to the dentist where I insisted on having more teeth pulled than just 2. They did another x-ray and sure enough, there was 4 teeth which were “hopeless”. After an hour total, all 4 teeth were removed and the bill was $44. I was surprised that I could get that many pulled without getting high and disoriented, but I guess that’s the magic of local anesthesia. He had to sew my mouth in one spot because two of the teeth pulled were adjacent and that caused a massive wound in my mouth. I have to use a special mouthwash and keep my mouth clean while it heals (which is 2 weeks). Still need a massive amount of work done, but I should be able to take some trips down to the city to have it done every once in a while.

Living with a Khmer Family 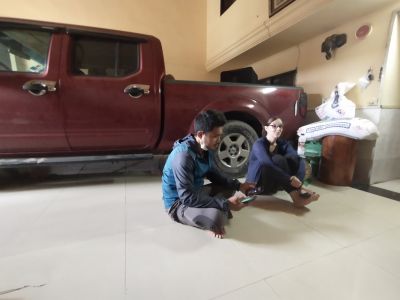 After the dentist, we drove to Thanak’s family’s house to spend the weekend with them. They were so disappointed and worried that I wouldn’t eat the first day, but I wanted to give my gums time to heal. They brought me a coconut to drink though, it was really good, not like the bland old coconuts you get in the States.

Thanak’s mom joked that I’d be better at sitting on the floor if I had a Khmer wife. Everyone (my friends from the States, and friends in Cambodia) says I’ll go back to the States with a Khmer wife, but from what I hear, those kind of cross-cultural marriages are a lot of trouble. As a single guy I enjoy having no cares or needs.

On Monday, Amy and Thanak and Samuel and I took a 12 hour road trip to their house in Preah Vihear province. They’re such wonderful hosts, and ministers of the gospel, I can’t believe how spoiled I am. It feels so much like home. 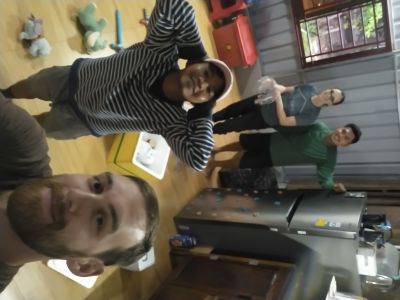 Can’t wait to show you what it’s like to be living and doing ministry in these villages!