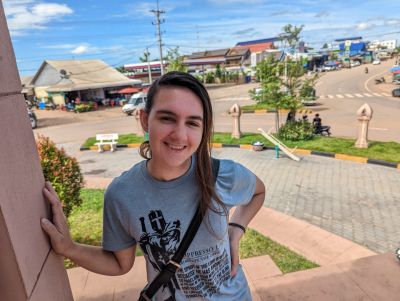 So way back in the end of July Tommy called me and asked if I wanted to go to Cambodia. There was a revival week coming up in September and they were having trouble finding babysitters and needed help. I responded with “maybe,” thinking that it wasn’t serious, Tommy is always asking all of us, “when are you coming to Cambodia?” It’s not like I could Just up and fly all by myself to another country. I get lost driving around Dubuque. Navigating airports would be harder. Though I passed off the Invitation as a Joke, it stuck with me. I had been wanting to visit Tommy for sometime but I never planned anything because I have a lot of responsibility. I’m pretty busy most of the time (which I enjoy). Then again I also didn’t believe I could just up and fly to another country by myself. I figured someday my family would go together.

So on August first when Tommy contacted me again asking if I had decided If I wanted to come I voiced my concern about navigating the airports. He said you will figure it out, just ask people for help. I decided Tommy was right and I wasn’t going to let fear stop me. Because if fear or work was the reason for me not to go, that wasn’t good enough. For that is not who I am in Christ. 2 Timothy 1:17 says For God has not given us a spirit of fear, but of power and of love and of a sound mind.

On September 15 I got on my first ever flight. It was fun. The take off reminded me of a rollercoaster. It slowly starts building up suspense before it all of a sudden goes and you’re flying. It felt short, as I must’ve slept a lot. I looked at the time until arrival and there were only two hours left. I remember thinking that can’t be right, this is a fifteen hour flight. But sure enough it was right.

My next flight was three hours long. Both flights were easy. I didn’t really have much trouble finding out where I was going. At the second fight I had to figure out what gate I was going to. Figuring that out took me only about five minutes or less. The hardest part of my trip to Cambodia was landing in Phnom Penh and not knowing what to do because the people working at the airport were speaking English but they were hard to understand. I kept thinking I just want to get through this and see Tommy.

Where to begin, there is so much to say about Cambodia. It is an amazing country. There are many times I forget that I am in a different country. When traveling the landscape reminds me of the road to my Grandma Downs’ Farm. lots of beautiful hills and sceneries.The transportation here is fantastic. Riding on motos is by far my favorite. It is the main way of getting to and from places where I am staying. Which is a good thing because to get to lots of the places you have to travel on dirt roads. During the rainy season the roads get a lot of ruts from being driven on. Tommy is really good at navigating those roads and not getting stuck. 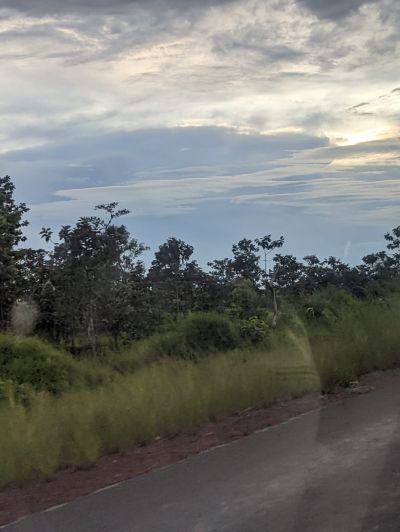 In the big cities like Phnom Penh the traffic and transportation is different. There are cars, motos, and carriage-like vehicles that serve as taxis fitting wherever they can on the road. I enjoy watching how it all flows. No accidents and no road rage. It just works. The main way to travel from city to city is by car if you have one or by night bus. The buses are pretty much full of bunk beds. Most of the time I sleep pretty well on the buses, but I genuinely sleep well anywhere. Whether it is on a long car trip or whether there is a lot of noise going on it doesn’t bother me.

I have found that Cambodians are competitive. The kids love playing rough and competitive games.You take a simple game of scoot and it is like “when did this game get so violent?” The kids are always wanting to play games. They come over several times a week, to play and about Jesus. How the kids settle arguments most of the time is with Rock paper scissors. Then the debate is instantly over. The adults are also competitive. I played a game of spoons but we had to use straws instead because the spoons would draw blood. It was fun watching everyone fighting over the straws. Whoever would lose had to deal the cards. I am not that competitive so I got to deal a lot. I didn’t mind at all. I should have expected the people would be fun, especially with a holiday celebrated with water wars. The people are also pretty relaxed and friendly. It’s fun listening to them talk, even if I don’t understand what they are saying. 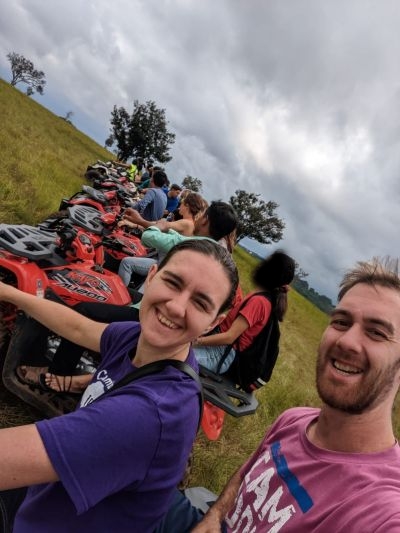 The food here is great. We mostly eat a lot of rice with different soups/dishes to go with it. People ask if I am tired of rice yet and the answer has always been no. I like rice. There are also lots of bananas. So people use them in cooking various things. My favorite is fried banana. There is always plenty of food. People tell me to eat more. I politely say no. I am never hungry enough to eat as much as they say. I think it’s funny that one person asked if I didn’t eat a lot because I was scared of getting fat.

During my time in Cambodia I have gotten to meet the Overland missions team here many times. There was revival week where we got together at the resort, The meetings with Jake and Jessie, the revival day at Matt and Kim’s house, and random other times. When talking about the Overland team in Cambodia It could take hours. They are all so amazing, fun, and creative. I have a blast hanging out, talking and playing games with them. They remind me of my family; They like playing games and having fun together but when it is time to get things done, everyone pitches in and gets the job done. When I go back to the states, the friends I made here in Overland are what I will miss most about Cambodia. 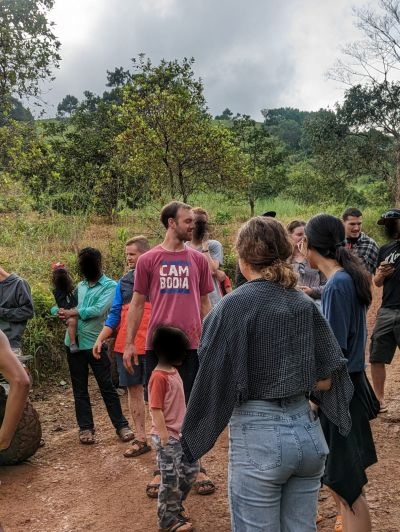 It has been amazing visiting Tommy, making new friends, seeing new places, and trying new things. I am glad I didn’t let fear keep me from coming to Cambodia. It has been a great almost two months but I am excited to go back home and see my family and friends again.