Welcome to the Jungle

I finished level one of language school, everyone has been real impressed with my pronunciation thus far. Still don’t understand most things, but I can kinda tell what people are talking about and I understand real simple conversations.

We took a motorcycle trip into the jungle village of Unthul the other day; I rode Thanak’s little 125cc moto and him and Amy and Samuel drove their 250cc. (I now have my own Moto) The road was really rough because we had to take the long way since Thanak’s big Moto was too large to take the boat. The road for this village is underwater most of the year and depending on how high or low the water that changes which path we take. Nevertheless a lot of the paths we had to drive through were subterranean anyway, but apparently your Moto can be most of the way underwater and still keep running as long as you keep the gas going.

The large Moto was better able to get over the bumps and creeks and mud, but the little Moto was easier to get unstuck since I can literally just lift and push it through spots that are too steep for it. (It helps that in Cambodia I’m a literal giant) I never imagined it would be that challenging to drive to Unthull but it took 3 hours and I learned a lot about off-roading.

We did take a 3 minute ferry going one way and were able to get our motos on it with little difficulty. On the way back the water was too low for the ferry but the water had receded enough to take the bridge.

We drove through many villages in our way and finally made it to our destination. We had to fix my moto’s tire though which had a leak. We took it to a little mechanic shop and they pulled the thorn out of the tire and patched the inner tube. Then Thanak oiled and adjusted the chains since we drove through so much water.

We went and talked with the village chief’s wife and she told us how she has never left the village.

I am dead people

The place we were staying at was with aunt and uncle and grandma. (This is how you refer to everyone in Cambodia depending on their age.) Grandma was sarcastic and teased me a lot, it was fun.

Once grandma was eating her leaf and seashell powder concoction -it’s a snack for old people- so the family asked me if I would like to try it. I have a reputation for eating and enjoying all food so I guess they wanted to test me out. They say I’m easy to raise because I’ll eat everything. Grandma watched with intense fascination as I chewed the astringent, spicy, and bitter snack; Cambodia doesn’t shy away from strong and unusual flavors and I really like that about this country because finally my taste buds are at home. It was a good snack so I told them in the language that I liked /mnuh slap/. Of course I said the wrong thing and instead of saying /məlu slaʰ/ the snack’s name I had said that I liked to eat “dead people.” This of course lead to much laughter and teasing and being christened as /mnuh slap/ (dead people) for the rest of the visit.

The grandma was a Christian who had gotten saved 2 years prior when Overland had had an expedition there but it was obvious from the spirit house out front that the rest of the family were still Buddhists. Nevertheless they had built an actual bathroom in hopes that more missionaries would come. They were so isolated that they wanted to know what flying on an airplane was like; they joked about wanting us to bring them Wat Phnom (the giant lawn clock) from Cambodia’s capital; and they joked that they wanted me to bring America to them. They asked us about the time difference on the rest of the world and after learning it they came to the erroneous conclusion that that is why foreigners stay out so late.

The previous night they waited somewhere until 10pm to buy a wild pig because we told them we were coming. Let me tell you, wild pig is fantastic; it’s so lean and tender and yet still pork. We also had roasted frogs and fried baby gar fish which were also both fantastic. (But I like everything so I guess people don’t trust me.) They also served baby corn in husk, so naturally I ate the husk too which they had to tell me to stop doing for some reason.

We’re excited to start going back to that village a couple times a month and getting a Bible study started. 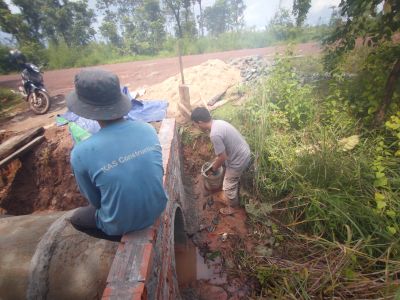 I love you all, I’m delighted to be in Cambodia and hope to bring many from the worship of idols and bondage to spirits to freedom in Christ. I have much more to say, but that’s for another update.